Ministry of Education, NTCE to consider D7 for university admissions

The Ministry of Education has begun consultations with the National Council for Tertiary Education (NCTE) to spell out implications of a new policy for admissions to universities and other tertiary institutions that introduces some flexibility in the consideration of non-credit passes.

Under the new policy, the status of grades such as D7 in some core subjects would be clarified to give hope to some applicants to the Humanities who have passed Mathematics without credit, but are still being denied access even to courses where Mathematics is not required.

The Minister of State in charge of Tertiary Education, Professor Kwesi Yankah, made these known when he addressed the joint 18th graduation and 28th matriculation of the Catholic University College Ghana (CUCG) at Fiapre, near Sunyani last Saturday.

“Simply put, government seeks to remove bottlenecks to admission processes and policies that are simply unjust, and discriminate against a majority of students from less endowed homes and institutions, where it is an exception than a rule, to get credit passes in all key subjects,” he explained.

Addressing the ceremony, Prof. Yankah stated that the emerging policy which had been fought for, for several years now had at long last received some positive attention.

“Some amount of discretion or flexibility is the answer, according to this new policy, which will be rolled out, after details have been fleshed out”, he said, adding however that the policy did not in any way mean that quality education would be compromised.

Rather, he explained that the new policy sought to introduce fairness into admission processes, as well as bring Ghana in line with more flexible admission practices in several countries far and near. 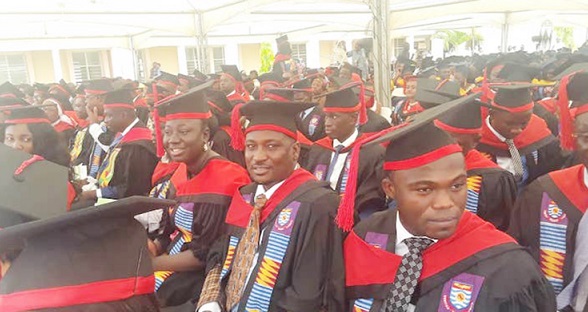 Touching on affiliations and institutional mentorship among universities, Prof. Yankah explained that the passage of the Tertiary Education Regulators Bill, which was currently before Parliament, would make that practice a thing of the past to bring considerable relief to private universities.

Prof. Yankah acknowledged that private universities in the country were currently enduring considerable challenges in freeing themselves from a system that was unfriendly to tertiary education within the private sector.

The challenges, according to him, ranged from needless competition, mentoring institutions, dwindling enrolments and age-old policies that left little or no room for self-determination and innovative curriculum.

Prof. Yankah said the truth was that the government needed the private sector to help mitigate the burden of education and its cost, otherwise solely borne by a highly constrained government.

“All the private sector needs is an auspicious business environment and regulatory framework in which to start and propel the wheels of education,” he said, adding that “the narrative, however, had been different and a number of private universities have felt frustrated, have struggled to pay back loans, and were until recently suffocating under nuisance taxes; others have indeed been on the verge of virtual collapse,” he observed.

For his part, the Vice Chancellor of the CUCG, Professor Daniels Obeng-Ofori, said the university submitted an application for grant of Presidential Charter to the National Accreditation Board (NAB) in January, this year.

He expressed the hope that the application would be considered by next year to enable the CUCG, which was currently affiliated to the University of Ghana, Legon and the University of Cape Coast, to be autonomous in the award of degrees to its students.

Prof. Obeng-Ofori announced that under its expansion of academic programmes, the university had continued to develop innovative and demand-driven academic programmes to meet the needs of industry and the national development agenda.

In all 550 undergraduates, 41 Master of Business Administration (MBA) and 129 Postgraduate Diploma students were awarded degrees while 540 freshers matriculated.

A six-year Corporate Strategic Plan for the university, intended to consolidate the gains made since its establishment was also launched during the ceremony.

The CUCG, established in 2003, has a mission to promote academic excellence, moral and ethical values as the integral personal development of its students and their commitment to service.

Its uniqueness lies in its objective to provide quality education that will enable students to understand the socio-cultural problems of Ghana, lead a life that expresses Christian ethical and moral values with a commitment to serve God and country, and meet the challenges of an increasingly complex world.