The Ghana Police Administration say  a newspaper report in the Daily Guide edition of Wednesday, April 24, 2019, titled “T’di Girls Rescued” is false and cannot be confirmed by the Police.

“Police have assigned liaison officers in Takoradi to coordinate information between Police and the families of the kidnapped girls and encourage family leadership to cooperate with the assigned officers” the statement added.

The statement urged Journalists, Publishers, Editors and Producers to desist from publishing news without verification from authorized Police sources.

The families of the three kidnapped girls have expressed displeasure about the lack of information from the police concerning investigations on the abducted girls.

They have also expressed disappointment and dissatisfaction at the pace at which the police are carrying out the investigation, indicating that keeping the families in the dark about the whereabouts of the girls is having a huge emotional impact on the families.

The suspect in the kidnappings, Samuel Udoetuk-Wills is currently on trial before the Takoradi Magistrate court. 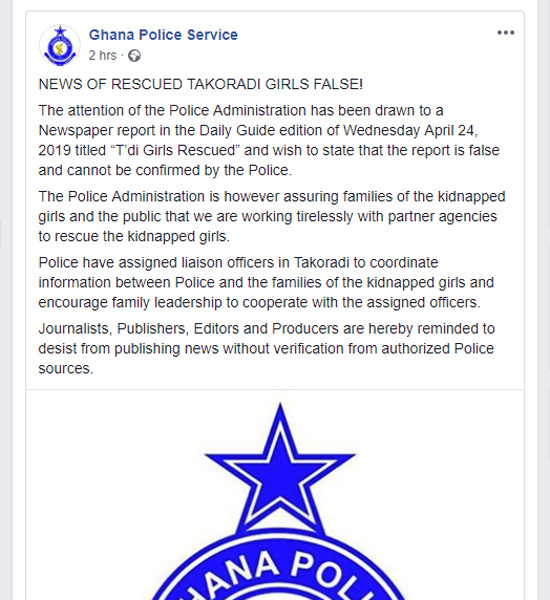