On March 7 this year, the Minister of Finance, Mr Ken Ofori-Atta, and the Governor of the Bank of Ghana (BoG), Dr Ernest Addison, officially communicated Ghana’s intention to exit from the extended credit facility (ECF) programme with the International Monetary Fund (IMF) in April 2019.

The letter was addressed to the Managing Director of IMF, Ms Christine Lagarde.

It followed successful completion of the programme, which took off in April 2015 with a primary objective of restoring debt sustainability and macroeconomic stability to foster a return to high growth and job creation, while protecting social spending.

In the letter, the two officials, on behalf of the government, extended “our gratitude to you, the Board and all Fund staff for being our trusted advisors.

“We are graduating from the ECF program on a strong note and are optimistic about our medium-term prospects to create a prosperous society for all,” it said.

It noted that the economy had responded positively to policies implemented during the IMF programme and cited the pick-up in growth and decline in inflation and the fiscal deficit as examples.

The letter also requested the Executive Board of the IMF to waive the non-observance of the performance criteria (PC) on some key indicators that were missed.

It mentioned the missed criterion as the wage bill, the net international reserves of BoG, for both end-June and end-December 2018, the PC on the primary balance for end-June (although met for end-December) and the continuous PC on gross credit to the government by BoG (missed in November 2018 following the exceptional intervention of BoG in monetising the bond assigned to the Consolidated Bank Ghana as part of the financial sector clean up).

The waivers were prerequisites to the country completing the combined seventh and eighth reviews of ECF arrangement, and to disburse the seventh and eighth tranches totalling the equivalent of SDR 132.84 million, according to the letter.

Below is a full copy of the letter: 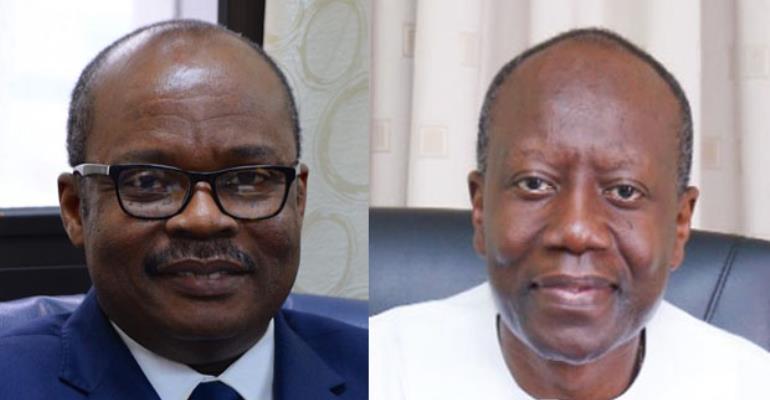 1. On behalf of the Government of Ghana, we hereby transmit the attached Memorandum of Economic and Financial Policies (MEFP) that sets out progress that has been made in the Extended Credit Facility programme which was agreed with the Authorities in April 2015.

2. Two years ago, this Government assumed office after winning an overwhelming mandate from the people ofGhana in December 2016. The Government inherited an economic programme that had been derailed with severe macroeconomic imbalances, significantly deviating from the programme objectives. During the last two years, the government requested for an extension of the programme and recalibrated the macroeconomic framework with the aim of restoring macroeconomic stability. During this period, some decisive and painful actions were taken to uphold fiscal consolidation and financial stability to promote growth and job creation.

3. We are happy to report that the economy has responded positively to these measures. Growth has picked up from3.4 percent in 2016 to 8.1 percent in 2017 and 6.7percent for the first three quarters of 2018. Inflation has declined from 15.4 percent to 9.0 percent in January 2019. The consolidation of our public finances has been successful leading to a significant reduction in the fiscal deficit from 7.3 percent of GDP in 2016 to 3.8 percent in2018. The primary balance turned positive at the end of 2017, the first time in almost a decade, and remained positive and as programmed at the end of 2018.

Our efforts have been welcomed both domestically and internationally, culminating in the first ratings upgrade from Standard and Poor’s in 2018, after almost a decade as well as the largest Eurobond issuance in 2018consisting of the issuance of the first 30-year bond and achieving the lowest rate on a 10-year bond sinceGhana’s debut Eurobond issuance in 2007. While progress on some structural reforms has been slower than anticipated, we continue to address outstanding vulnerabilities.

4. In light of the resolve and commitment shown in implementing macroeconomic policies and reforms, the government of Ghana requests the IMF Executive Board to waive the nonobservance of the Performance Criteria(PC) on the wage bill, the net international reserves ofBank of Ghana (BoG), for both end-June and end-December 2018, the PC on the primary balance for end-June (though met for end-December) and the continuous PC on gross credit to the government by the Bank of Ghana (missed in November 2018 following the exceptional intervention of the Bank of Ghana in monetizing the bond assigned to the Consolidated Bank,Ghana as part of the financial sector clean up), to complete the combined seventh and eighth review of the Extended Credit Facility (ECF) arrangement, and to disburse the seventh and eighth tranches totaling the equivalent of SDR 132.84 million.

5. Going forward, we are committed to continue to pursue the appropriate mix of policies to support growth while at the same time being mindful of the need to safeguard macroeconomic stability. Securing the irreversibility of our policies, through the building of strong institutions, remains a key strategy for enabling us to achieve ourvision of moving “Ghana Beyond Aid”.

We have, therefore, put in place a legal framework to help secure fiscal discipline. As a first step, we have passed the FiscalResponsibility Act, 2018 (Act 982) which caps the fiscal deficit at 5 percent of GDP, and ensures the maintenance of an annual primary surplus. We have also established and inaugurated a Fiscal [Responsibility] AdvisoryCouncil and a Financial Stability Advisory Council. These frameworks and structures should ensure the irreversibility of reforms and measures introduced to sustain macroeconomic stability and discipline, and provide an anchor to guide policies in the medium term.

6. The President’s “Ghana Beyond Aid” agenda remains on course. This transformation agenda is anchored in growing the productive sectors of the economy, boosting domestic revenue mobilization, diversifying our export receipts to value-added products, and positioning Ghana as the Regional Hub for financial services, transportation, energy, fintech and logistics hub, while making Ghana aWISER Society (Wealthy, Inclusive, Sustainable,Empowered, and Resilient). We are also confident that renewed collaboration with Republic of Côte d’Ivoire in the cocoa sector will strengthen our bargaining power as we process more locally, and other partners in the oil sector will ensure we retain maximum benefit as numerous major oil players emergence on our shores.

7. As we conclude and exit this Extended Credit Facility arrangement, we extend our gratitude to you, the Board and all Fund staff for being our trusted advisors. We are graduating from the ECF program on a strong note and are optimistic about our medium-term prospects to create a prosperous society for all.

8. The government consents to make public the content of the IMF staff report, including this letter, the attached RFP and Technical Memorandum of Understanding(TMU), and the Debt Sustainability Analysis (DSA)performed by IMF and World Bank staff and, therefore,authorizes the IMF to publish these documents on its website once the IMF Executive Board approves the completion of the seventh and eighth reviews under the ECF program.